Below are a few photos from my last trip to Grand Canyon. There are landscape photos and some textural/abstract stuff. Click on the images to find desktop wallpaper-sized versions (1920×1080) you can download. Enjoy. 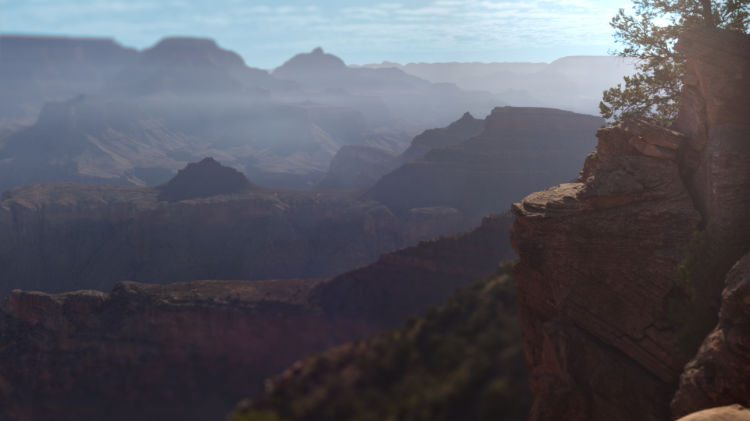 This is a view from the South Kaibab Trail below Ooh-Ah Point and above Cedar Ridge. An outcropping of Coconino Sandstone is visible in the foreground. Pattie and Newton Buttes are visible atop one of the Redwall mesas. In the distance are Wotans Throne and Vishnu Temple. Right-click to download. 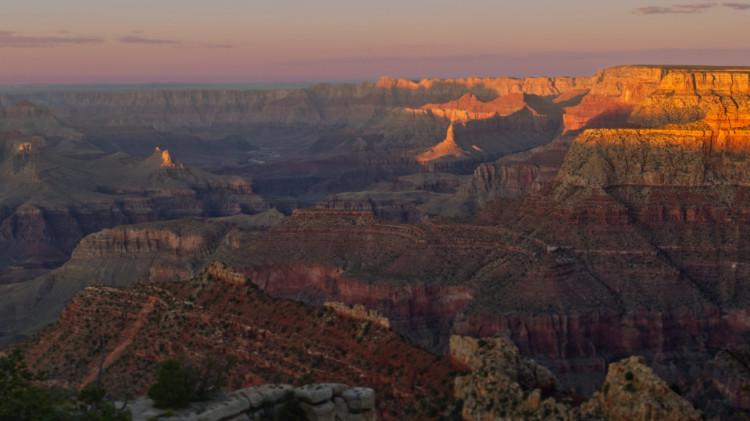 Sunset from near the Grandview Trailhead. A tiny little bit of the Colorado River is visible if you look closely. The sunlit area on the canyon rim extends to either side of Desert View. Right-click to download. 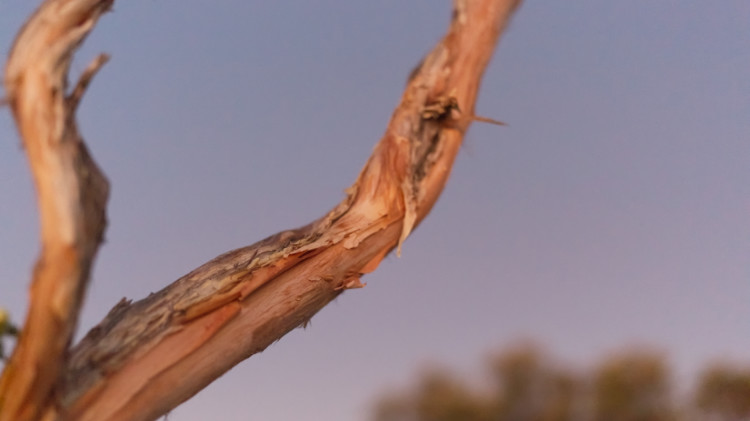 A cliffrose branch at sunrise, near Mather Point on the South Rim. Right-click to download. 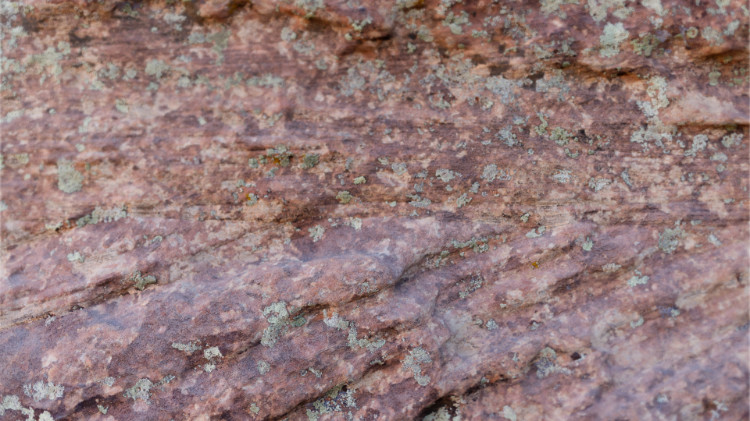 Coconino Sandstone along the South Kaibab Trail. This is one of the first exposures visible as you hike downhill, near Ooh-Ah Point. Right-click to download.

Hackers! What a movie. It’s been like 45 years since I last watched it but I still remember just enough to rewrite the script incorrectly from memory. 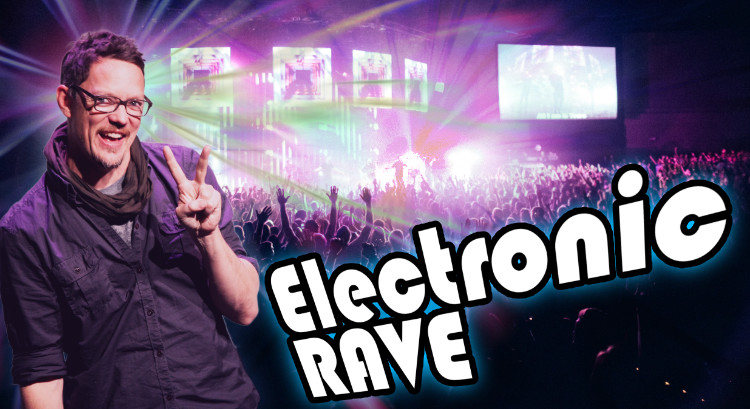 THE GUY FROM SLC PUNK AND SCOOBY-DOO WHO HAD A GOOD RUN IN THE NINETIES is at a RAVE with ANGELINA JOLIE and their cool hacker crew, CRASH OVERRIDE, MATRIX EFFECT, and DAVID BSOD.

GUY FROM SLC PUNK
What a big party

DAVID BSOD
I agree with both of you

ANGELINA JOLIE
Did you hear about the new hack?

The rave intensifies. WEIRD AL plays “All About the Pentiums” on stage. 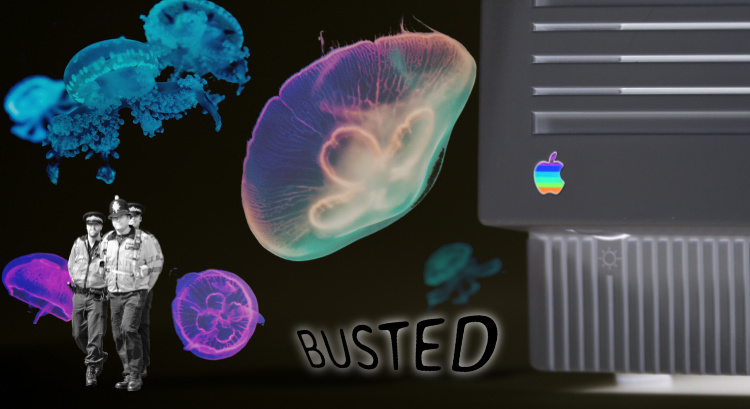 DAVID BSOD is hacking at night with MACINTOSH QUADRA. He wants to be as cool as GUY FROM SLC PUNK and sometimes he even thinks he is but sometimes he doesn’t know.

DAVID BSOD presses THE SPACE BAR. On the computer screen of his MACINTOSH QUADRA, a box appears.

Suddenly the door bursts open! THE FEDS have guns and handcuffs.

THE FEDS #1
You’re under arrest for computer hacking!

THE FEDS arrest DAVID BSOD and carry him from his room. He freaks out.

SCENE 3: Finding out about the stuff 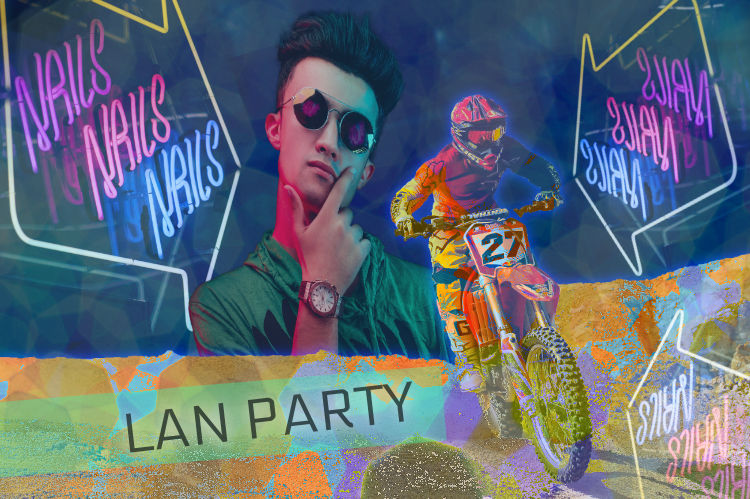 EXT. THE CITY AT A LAN PARTY — NIGHT

GUY FROM SLC PUNK
Oh man, this is crazy, it’s all over Usenet! Everyone is freaking out!

MATRIX EFFECT
What? I just got here. I haven’t logged on for three hours and am jonesing for downloads. My modem is broken!

CRASH OVERRIDE
THE FEDS arrested DAVID BSOD! They got him on federal hacking charges! But the whole Usenet says that DAVID downloaded a mainframe with secret info from THE BOAT GUY!

GUY FROM SLC PUNK
No way! DAVID BSOD is just a script kiddie! He can’t hack!

ANGELINA JOLIE
You need to check it; you used to be just like DAVID. Remember your first EXE? I think this is real. The secret info from THE BOAT GUY’s mainframe is all about the big hack!

MATRIX EFFECT
From talking at the rave? That hack?

GUY FROM SLC PUNK
I remember that hack! It was huge! This could be real! Guys and ANGELINA JOLIE, we all need to take down THE BOAT GUY’s big hack!

CRASH OVERRIDE
Here’s how it goes down. ANGELINA JOLIE, you steal back DAVID BSOD’s MACINTOSH QUADRA because the dumb feds left it behind, I’ll do some hacking with GUY FROM SLC PUNK, and MATRIX EFFECT you get a new computer because your modem is broken.

MATRIX EFFECT
I’m on it, I’ll steal it with hacking

SCENE 4: THE BOAT GUY has a plan 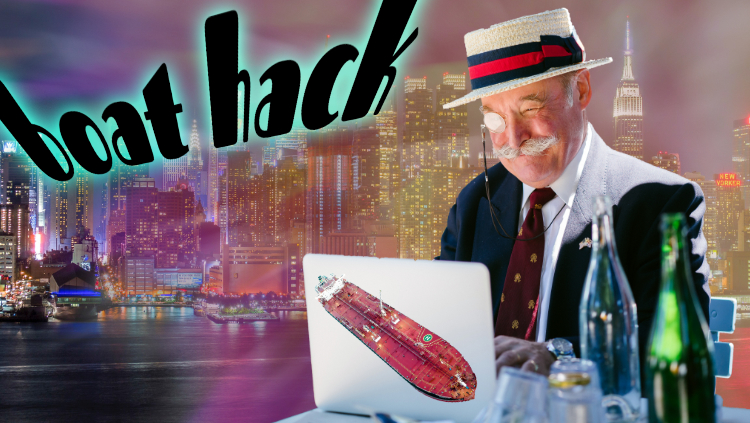 INT. OFFICE IN A SKYSCRAPER — NIGHT.

THE BOAT GUY is in a big computer office with PENN AND TELLER.

THE BOAT GUY
I have a big plan to take down the world economy and enrich myself; I think it somehow involves a boat.

MR. AND MRS. BSOD are reading a newspaper printed on actual paper. MR. BSOD is smoking a pipe when THE DOORBELL rings.

MRS. BSOD
You stay there Henry, I’ll get it

MRS. BSOD opens the door. ANGELINA JOLIE is standing there dressed in an all-leather DOMINO’S PIZZA outfit. Behind her is a Kawasawki Ninja with ground-effect lighting. It is parked next to a LAMBORGHINI COUNTACH and a 1982 CHEVY MALIBU with NICE RUST PATINA.

ANGELINA JOLIE
I’m here to deliver that pizza you ordered; I accept payment in MACINTOSH QUADRAS.

MR. BSOD
I didn’t order any pizza! Hackers use it to steal who you are!

MRS. BSOD
DAVID must have ordered it for some late-night hacking. You can take it to his room.

ANGELINA JOLIE enters DAVID BSOD’s bedroom. She puts down the pizza and picks up the MACINTOSH QUADRA.

ANGELINA JOLIE
[speaking to herself but also directly to camera]
Even if you are not confident in who you are, I am, and I believe in you. One day the people you admire will believe in you too.

ANGELINA JOLIE leaves the bedroom and passes through the living room. She acknowledges MR. and MRS. BSOD.

She shuts the door and leaves. [Sound: A Kawasaki Ninja revs its engine and ramps off a Lamborghini Countach.] MR. BSOD has an epiphany.

MR. BSOD
“Shoot you an email”? That’s no pizza delivery person … she was … she was … a HACKER!

THE MATRIX EFFECT hacks a lock to steal a computer on a pay phone.

THE MATRIX EFFECT
One last thing!

THE MATRIX EFFECT steals a can of camouflage-colored Krylon and sprays down the stolen laptop with a cool camo paint job. 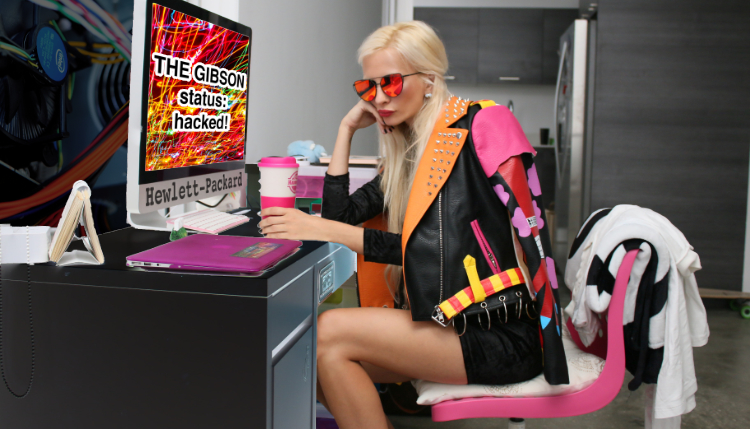 The whole HACKER CREW is back at their base having a hacker party. ANGELINA JOLIE drives in on her Kawasaki Ninja carrying a MACINTOSH QUADRA in her messenger bag.

GUY FROM SLC PUNK
Let’s see if this does anything; DAVID BSOD is just a script kiddie but I’m open to learning more.

CRASH OVERRIDE
Yeah, me too, THE BOAT GUY’s plan could be serious.

CRASH OVERRIDE
The mainframe filesystem! It’s true! THE BOAT GUY has a plan to enrich himself while crashing the world economy!

ANGELINE JOLIE
I told you DAVID BSOD was legit. [Speaking directly to camera] I believe in you.

GUY FROM SLC PUNK starts the hack by blowing a whistle into ZACK MORRIS’s cell phone. The hack is too intense. 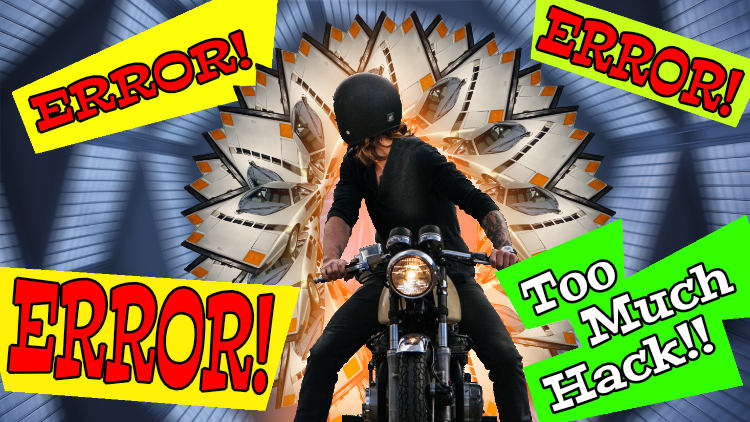 The phone rings. PENN AND TELLER #2 picks it up.

PENN AND TELLER #1
What? What?

PENN AND TELLER #2
We’re being hacked!

PENN AND TELLER #1
Deploy the firewall and unhack the BIOS!

PENN AND TELLER #1 angrily throws a copy of Reason magazine across the computer office.

ANGELINA JOLIE
THE BOAT GUY’s sysadmins are on to us! Hack harder!

CRASH OVERRIDE
Bad news guys! DAVID BSOD’s parents called the feds on our pizza delivery scheme! The Government Computer Crimes division is on to us!

In the background a TV blares. The head of Government Computer Crimes Division is talking.

HEAD OF GOVERNMENT COMPUTER CRIMES DIVISION (on TV)
We will stop all the hackers! The hackers are so bad!

GUY FROM SLC PUNK
This guy doesn’t understand us at all!

ANGELINA JOLIE
[whispering directly into the camera]
I understand you

A HARD HACK hits the group. They hack back.

GUY FROM SLC PUNK
I’ll deploy a virus! CRASH OVERRIDE, you let THE FEDS know that THE BOAT GUY is up to no good! 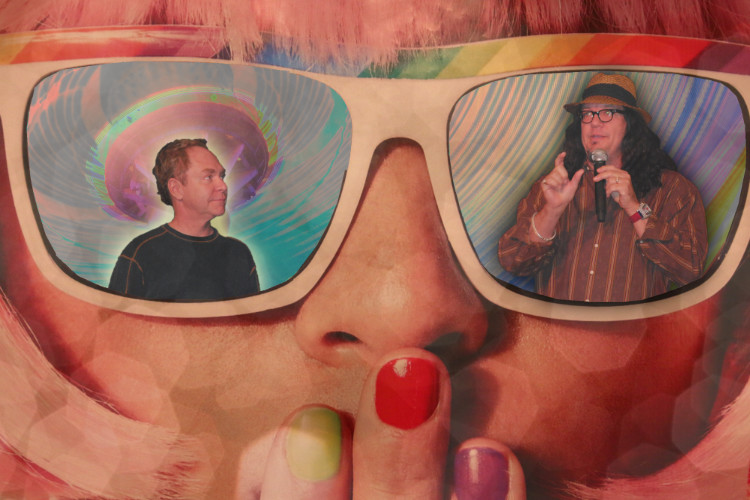 A big COMPUTER SCREEN has COOKIE MONSTER on it.

THE FEDS are on their UNIX terminals.

THE FEDS #2 leans over behind THE FEDS #1 to read the incoming email.

THE FEDS #2
This is serious! THE BOAT GUY has a plan to enrich himself while destroying the world economy!

THE FEDS #1
Looks like he’s on a flight. Can we ever catch him in midair?

MUSIC CUE: Ominous music about the the world economy

INT. GIANT BOAT — STILL DAYTIME ON THE SAME BOAT IN THE SAME OTHER TIME ZONE

A mechanical part does something connected to a computer

INT. HACKER PARTY — NIGHT BECAUSE WE’RE BACK IN THE FIRST TIME ZONE

SOUND EFFECT: Mechanical whir shutting down and slowing to a halt

SOUND EFFECT: Like something got unplugged. THING THAT IS HAPPENING: The mechanical part connected to the computer turns off. Also a blinking light also turns off. There is a Garfield doll with suction-cup feet in the room.

PILOT
Sir, can you come with us please?

SCENE 8: The ending before the ending

DAVID BSOD is released from prison. ANGELINA JOLIE picks him up on her Kawasaki Ninja. She throws MACINTOSH QUADRA into his open arms.

ANGELINA JOLIE
I always believed in you 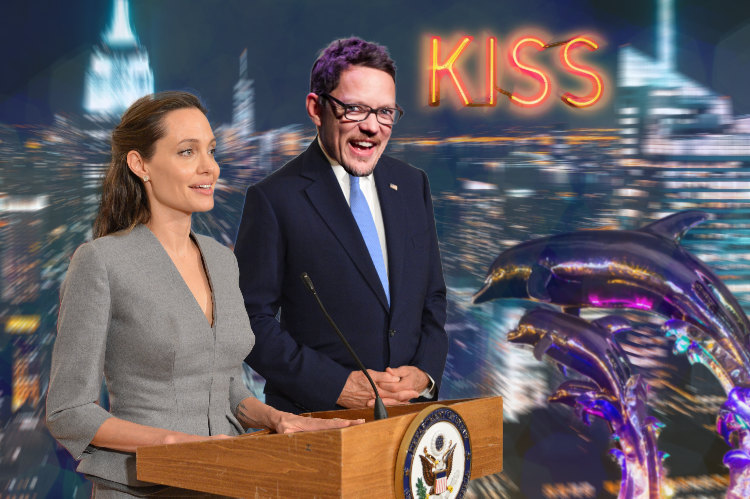 EXT. THE CITY IN A POOL — NIGHT BUT YOU THINK MAYBE IT COULD BE THE MORNING IN A COUPLE HOURS

ANGELINA JOLIE and GUY FROM SLC PUNK are in the pool hacking.

ANGELINA JOLIE
I think this could be love.

GUY FROM SLC PUNK
Could it be?

Behind them, two giant skyscrapers light up all of a sudden. The lights in the windows spell out the answer to the question.

TWO GIANT SKYSCRAPERS
Yes it is

Fireworks shoot off while CRASH OVERRIDE and THE MATRIX EFFECT wave hello from the top of the skyscraper. THE GUY FROM SLC PUNK and ANGELINA JOLIE share a passionate kiss.

But then a blinking cursor backspaces over the text.

BONUS SCENE 10: The ending from Poltergeist 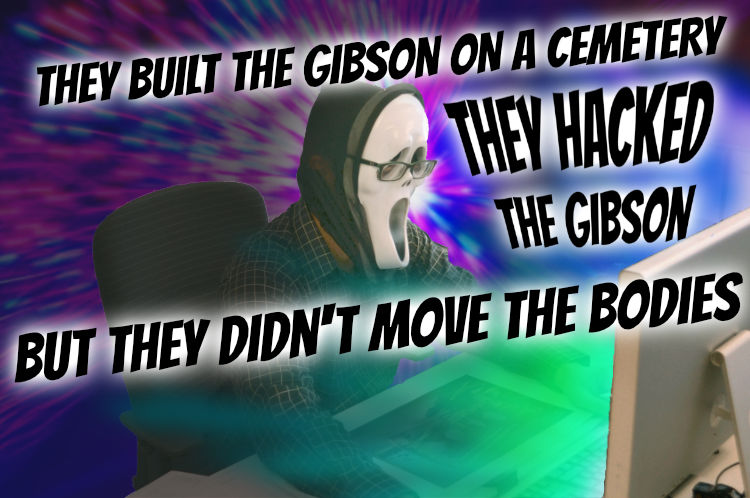 The whole HACKER CREW walks into a room at a Holiday Inn. The door shuts. The door opens and GUY FROM SLC PUNK pushes the TV out of the room and looks around. He walks back into the Holiday Inn. 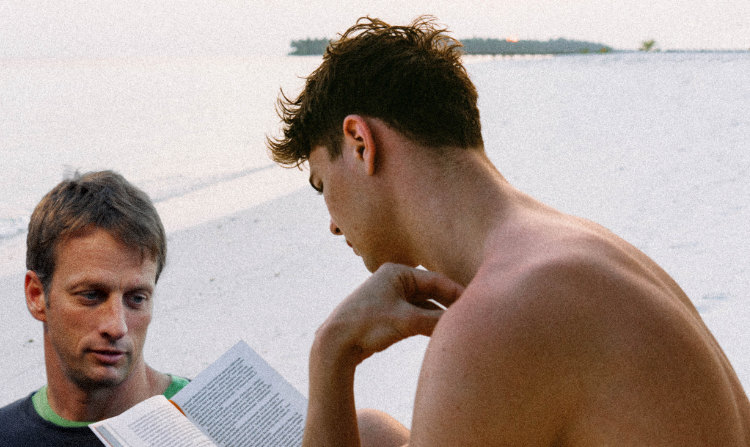 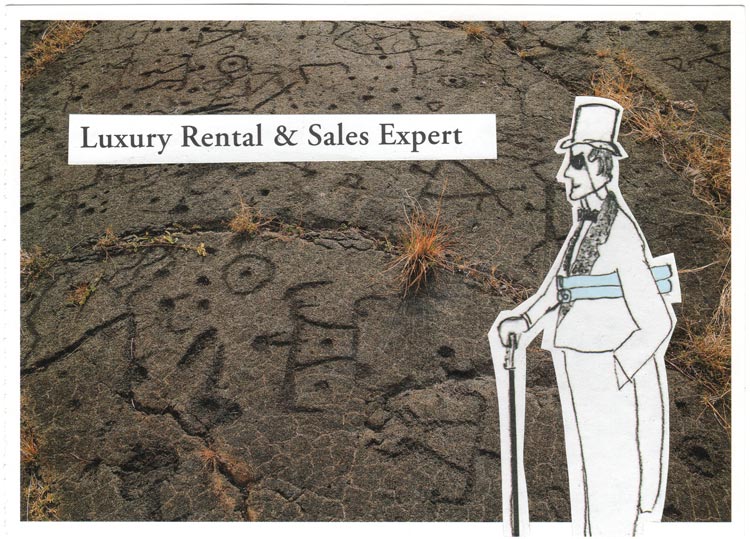 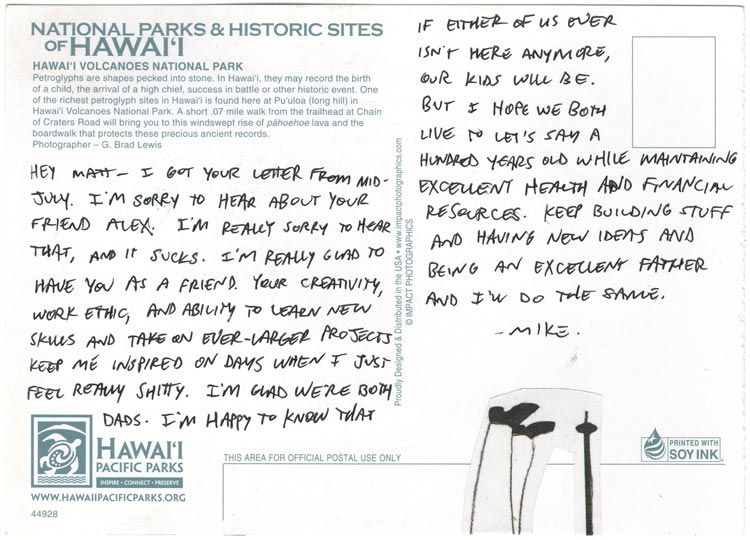 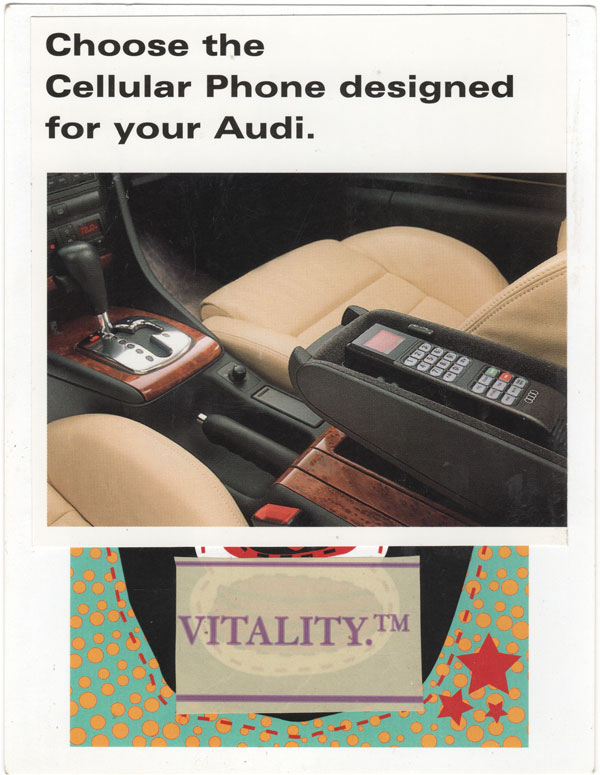 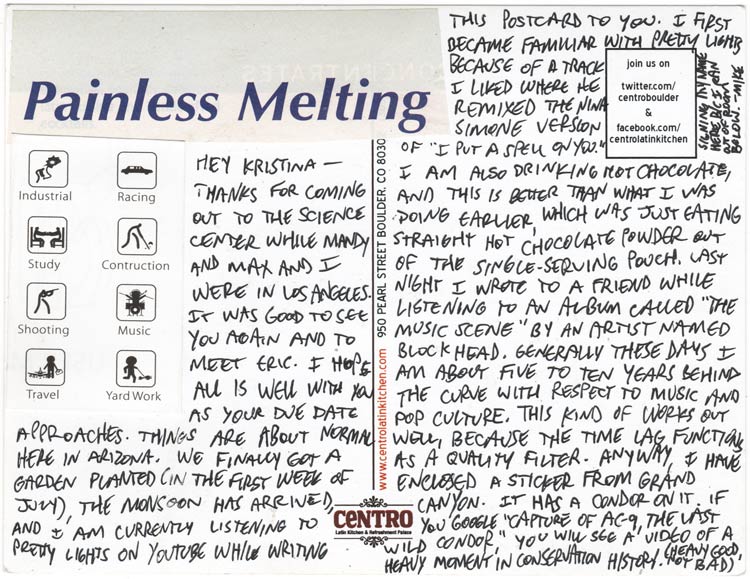 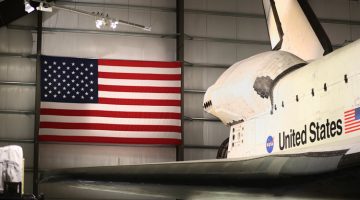